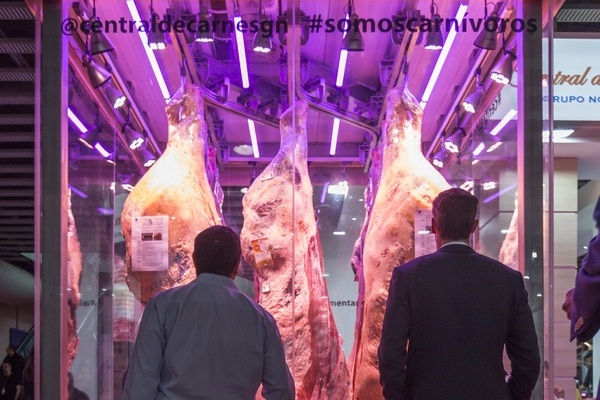 From 4 to 7 April 2022 in Hall 3 of Fira de Barcelona’s Gran Via exhibition centre, Intercarn will once again showcase all the power and quality of the Spanish meat industry, presenting the main products of a market that is the fourth largest sector and accounts for 2.3% of Spain’s GDP. Exports are also thriving, as they grew by 12.6% from January to November 2021, exceeding 35 billion euros, according to data from the Spanish Federation of Food and Drink Industries (FIAB).

This power and strength of the meat sector will be manifest during Alimentaria, making Intercarn the most extensive area of the entire event. It will gain 1,000 m² compared to the last edition in 2018, and among its offering it will feature the leading meat companies exhibiting fresh meats, hams, sausages, cooked meats and other derivatives, new meat ready meals, as well as the main new items on the market.

According to the president of Intercarn and managing director of Noel Alimentaria, Anna Bosch, “after two difficult years, the Spanish meat industry has once again placed its trust in Intercarn and has committed to its participation. The show reaffirms its position as the leading platform for business and internationalisation, with the most complete sectoral offer and the only one which offers the possibility of leveraging the synergies generated with the other Alimentaria shows”.

Likewise, the most representative associations of the sector also stand by Intercarn, such as the Interprofessional Food and Agriculture Organisation for Spanish White-Capped Pigs (INTERPORC), the Meat and Meat Industries Business Federation (FECIC), and the Meat Business Association (ANAFRIC), among others.

International buyers
In order to continue consolidating their position as the leading international platform for the Spanish meat sector, Alimentaria and Interporc have created a programme to attract international buyers, which 17 countries have already joined, including Chile, China, Colombia, Ecuador, South Korea, Ivory Coast, the Philippines, Malaysia, Mexico, Peru, Singapore and Vietnam. The big Latin American retail chains Cencosud, Tottus, Santa María Supermercados and Dibeal, among others, will also participate.

In this regard, the Vall Companys Group’s representative at Alimentaria, Enrique Gil, applauded the hosted buyers programme as “it will enable high-level meetings with key professionals from leading companies in the industry and distribution”. Gil was also point out that “the Spanish livestock and meat sector is a model in breeding, efficiency, animal welfare and sustainability. Values that are widely applauded beyond our borders, which gives it an advantage compared to other markets.

Alimentaria Foodtech
The technological transformation that the food industry is undergoing will also have an exceptional presence at Intercarn. After the postponement of Alimentaria FoodTech in September 2023, this equipment, ingredients and technology show for the food industry will have its own area of around 2,000 m² at Intercarn. It will be a representative sample of some of its sectors and will have its own differentiated programme of activities, including an exclusive buyers’ programme with the participation of 32 companies, mostly from the processing and ingredients sector, a third of which will be attending the show for the first time.

The next edition of Alimentaria will be held once again in conjunction with Hostelco, the International Hotel and Restaurant Trade Show. Together, the two events will occupy more than 85,000 m² of net exhibition space, almost the entire Gran Via de Fira de Barcelona exhibition centre, and will bring together nearly 3,000 exhibiting companies. Of the 150,000 professionals who visited the last edition of the event in 2018, almost 30,000 were buyers interested in the meat industry.